Matt is one of the founding members of Adamantditto and has been gaming since the age of three. Matt is a big fan of everything from Mario to Sonic to twisted Metal. He handles a lot of the editing and technical stuff for the channel and is always anxious to see where the road takes him. Occasionally Matt brings in his fiance Carissa to the Adamantditto channel, though Carissa doesn't like video games as much she's always happy to be able to spend time with Matt and his friends. 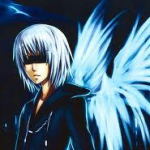